What has long been permitted in Asia and Europe is now also coming to the USA: "Smart" headlights have only been permitted here for a few months. However, the responsible U.S. authority has special requirements for vehicle lighting, which are primarily intended to increase safety in road traffic. This is not a problem for the Light & Visibility experts at EDAG - they develop complete solutions according to international standards.

The European automotive industry should be grateful to the American president. Joe Biden launched a bipartisan infrastructure investment bill in 2021 [https://de.usembassy.gov/de/parteiuebergreifender-gesetzentwurf-fuer-infrastrukturinvestitionen/] that will not only provide for better roads, bridges, and railroads, cleaner drinking water and faster Internet; but also directs the U.S. National Highway Traffic Safety Administration (NHTSA) to allow adaptive driving lights.

New ADB market in the USA

Until now, it was mandatory in the U.S. for every vehicle to be capable of two different lighting modes, low beam and high beam - alternatives were not allowed. With the latest change in the law, which came into force in February, ADB (Adaptive Driving Beam) headlights are now explicitly permitted.

Nevertheless, the automotive industry is not entirely content and grateful - for several reasons. Experienced premium manufacturers cannot simply use their technology in U.S. vehicles on a 1:1 basis, even though it complies with current standards in Europe, Canada and Asia, for example. In its own regulation covering 300 pages, the NHTSA has ensured that vehicles for the U.S. market require adapted or newly developed solutions that meet the approval requirements there.

U.S.-based OEMs that do not use this technology in Europe often lack experience in this field - they now need to catch up as quickly as possible to remain competitive in the race with European and Asian rivals. Interest among American market participants is high - the first suppliers have already announced their intention to use the new technology. These suppliers include the e-mobile provider Rivian and the startup Lucid Motors. For the newcomers, it is essential to score points with cutting-edge technology. However, the traditional luxury class OEMs are also positive about ADB, which they can promote as an additional safety feature on their vehicles.

Adaptive driving lights provide an enormous safety gain in a number of different situations. For example, selective dimming in oncoming traffic means that oncoming drivers are not dazzled, but the driver's own path remains illuminated over a greater distance than with conventional dipped headlights. Pedestrians and cyclists are also less irritated - by avoiding the glare, they can react more appropriately, which contributes to fewer accidents.

A smart headlamp also has advantages in fog: the road is well illuminated to the front and the edges without drivers themselves being dazzled by strong reflections and thus endangered.

Further development of adaptive lighting should make driving even safer and include road users outside the vehicle to a greater extent. Research is already being conducted into projecting warnings onto the road, for example using arrows and symbols, to draw attention to dangerous situations. For example, when turning or when traffic jams are imminent. This is also being done against the backdrop of autonomous driving - when there is no longer a human behind the wheel to give a friendly wave, in order to clarify a situation in case of doubt.

ADB is based on intelligent adjustment of the illuminated zone according to the detected traffic situation. If there is oncoming traffic, for example, the light zone is reduced to avoid dazzling the other driver. The same applies if there is another vehicle in front: in this case, the corresponding area is dimmed or blacked out. When cornering, the light cone travels with the vehicle so that the road is always illuminated and the light beam does not simply point straight ahead into the open terrain.

This is achieved using a matrix light source in which light beams are generated in a grid. Similar to a projector, a chip with integrated mirrors is often used to switch each light beam on or off. The lenses and reflectors of the primary and secondary optics create overlapping light fields that generate a continuous light surface. The individual spotlight elements are controlled to adjust to the respective dimensions: the distance up to which the illumination zone extends, how wide it is, the direction in which it points, as well as the shape, size and intensity of the omission or dimming.

Both vehicle manufacturers and system suppliers can benefit from EDAG's know-how and experience in ADB technology. The Center of Expertise (CoE) "Light & Visibility Team" has its headquarters in Wolfsburg, but is networked worldwide and includes, among others, the American locations in the USA, Mexico and Brazil. This means that customers can find competent local contacts in every region.

The CoE can already draw on extensive project experience with many different OEMs and suppliers. In Europe, adaptive headlights have been permitted since 2006. The CoE has been developing headlamp technologies for more than ten years and has steadily expanded its expertise and services during this time. 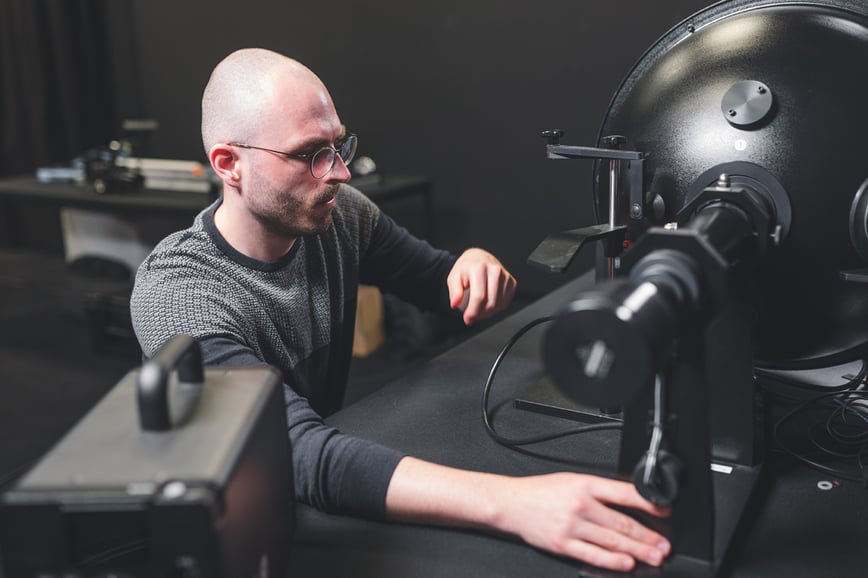 EDAG carries out photonic measurements in its own lighting laboratory in Wolfsburg.


On the way to series production, the analysis, visualization and validation of lighting scenarios are also on the agenda, up to and including functional, vehicle and homologation tests. Photonic measurements are carried out in the company's own lighting laboratory, providing data on luminance, distribution of brightness and color gradients, dominant wavelengths and illuminance, for example.

Another tool is the use of virtual reality (VR) to demonstrate the integration of lighting solutions into existing scenarios, to show designs as well as different lighting packages and functions, or to visualize physically correct light propagation, including brightness and color changes.

The highly complex communication in the adaptation process poses a major technical challenge, because a whole range of different systems is involved. One of these is image recognition using a camera. This is supplemented by various sensors, such as a high-precision GPS positioning system, a rear radar, or the steering sensor.

All data and measured values must be transmitted to the central unit (ECU) for processing in order to determine the path of travel from the current vehicle position and speed as well as the direction of movement and steering angle, and to identify the relevant objects in this area. The ECU then communicates with the headlights via the CAN vehicle bus to trigger appropriate responses.

The design and simulation of the intelligent matrix headlights are combined in the CoE "Light & Visibility". Beyond this, however, EDAG offers technical support for all the areas involved, so that customers can obtain not "just" the headlamp technology, but an overall package with a comprehensive complete solution - in other words: everything from a single source.

This includes, for example, the development of control units (lighting ECU), from PCB design to the creation of prototypes, software programming, integration of the ECU into the vehicle architecture, including data communication and integration into the driver assistance systems (ADAS, Advanced Driver Assistance Systems).

Internationality is the trump card

In addition to technical expertise in all relevant areas, such as lighting design, hardware and software, and integration into the vehicle network, the development of safety-related vehicle functions also requires knowledge of the regulatory framework. For EDAG, with its worldwide network that includes locations in North, Central and South America, Northern Europe, China and India, this is part of daily business. Just as is now the case with adaptive driving lights in passenger cars, different regulations are also found in the truck sector with regard to vehicle lighting.

EDAG's lighting experts are closely involved with such regulations. In a white paper, our experts have recorded the differences between the EU, USA and China with regard to the front, rear and side lighting of vehicles over 3.5 t, and present all the relevant information in condensed form. The paper also provides an overview of the various world markets. Download the PDF here.

Tibor Giesen, Team Leader CoE Lighting Technology and Jannes Buthmann, Project Manager Lighting Technology will be happy to answer any further questions you may have on vehicle lighting for cars and trucks, and on the services offered by the Center of Expertise (CoE) "Light & Visibility Team". 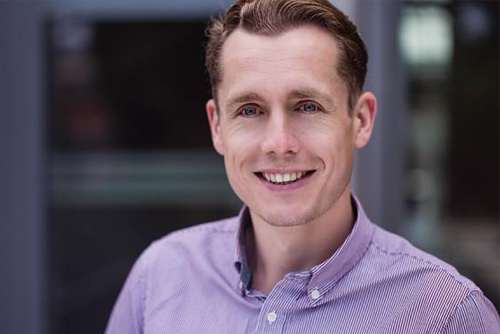 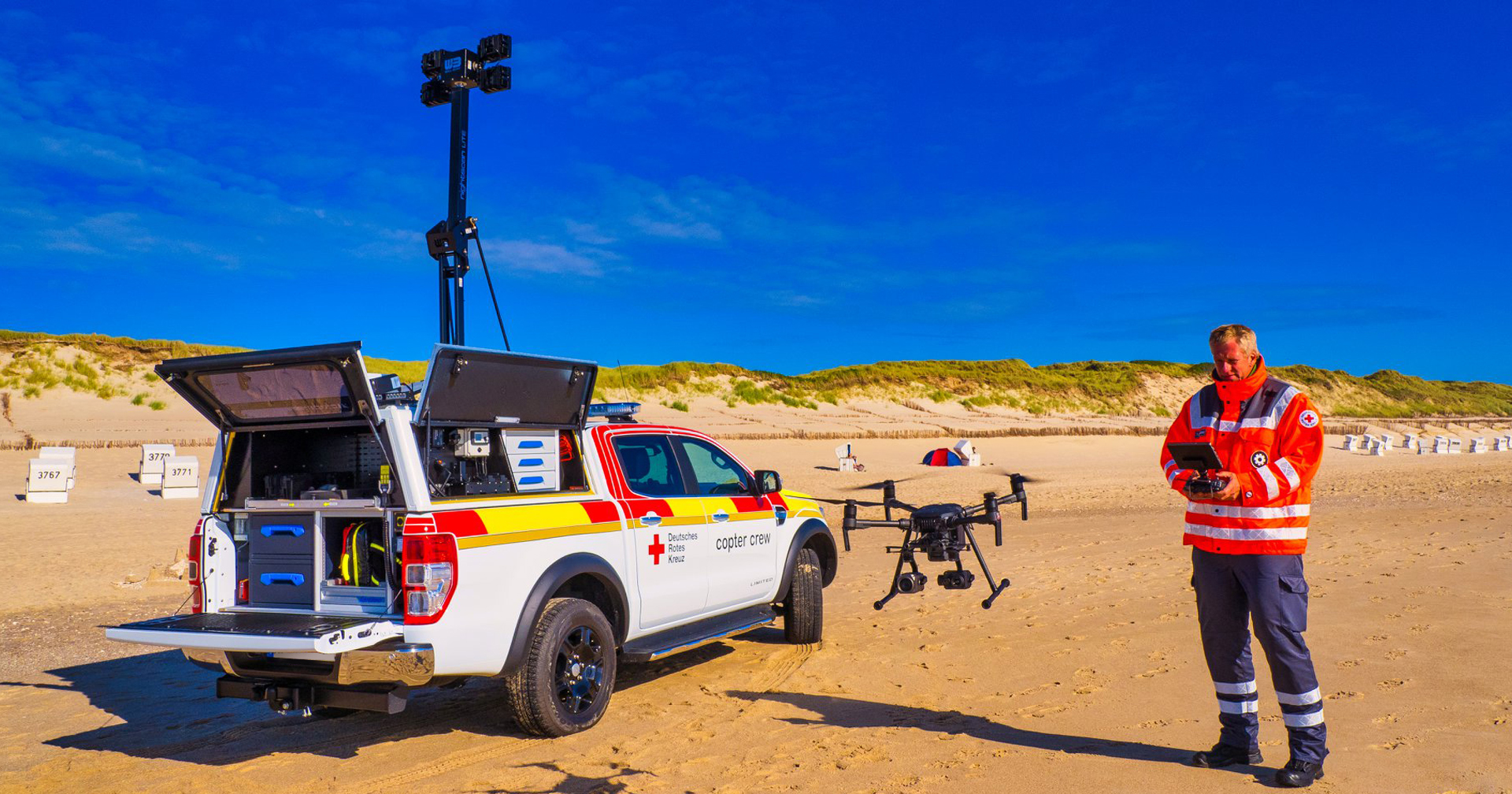 The local German Red Cross (DRK) association in Neuhof has a very special emergency vehicle: a Ford Ranger with a 30,000-euro drone in the rear body, an 80,000-lumen light mast on the roof and an adapted chassis for difficult terrain. Yet these are just the externally visible changes, in addition to the DRK livery and the customary flashing blue...

As a general rule, EDAG's development activities center on passenger cars for regular road traffic. Occasionally, however, it is also a Lamborghini Hurácan GT3 EVO. Collaboration with the T3 Motorsport racing team is providing new findings in the fields of simulation and vehicle dynamics - and is also attracting graduates who see their future in...